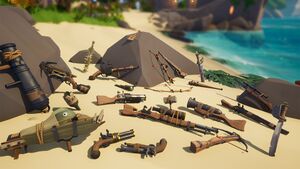 Variety of weapons in Blazing Sails

There are many weapons in Blazing Sails. Most weapons are single or multiple shooting but there are almost no automatic weapons such as fast firing machine guns. Because Blazing Sails is set in a fantasy version of the 17th century there are however quite a lot of fantasy weapons, including a few fast firing ones but these are quite uncommon.

Usually, weapons with higher damage have a lower drop chance. However, every weapon is viable and has strong and weak points.

All ranged weapons need the correct matching ammo. Damage-wise weapons vary. Head-shots always deliver 1.5 times the regular damage. Each weapon has a primary and secondary function. Most ranged weapons have a zoom as secondary.

When holding a melee weapon in Blazing Sails you move a bit faster, so you can dodge enemy shots more easily. You also have the ability to block other melee attacks. This creates the opportunity to have some awesome sword fights with your enemy. If you block an enemy attack successfully they’ll get stunned for a short while and they won’t be able to attack (left mouse button) or block (right mouse button) for a few seconds. To prevent the eternal block move there's a timer to the block mechanic. If you block too long, you’ll receive a cool-down and you’ll have to wait a few seconds until you can block again.

This category currently contains no pages or media.